Davut and I posed in an old-time photo in Turkey

I wrote about my dear Turkish friend Davut before.  I met him 8 years ago when I escaped from frozen Russia to spring-like Turkey.  He was a special Turkish Army Officer improving his English at my second language school.  I was fired from the first language school in the first week–for sharing about Russian Easter traditions.  Some Muslim students complained.  I protested being fired for being a Christian when Turkey’s Constitution grants freedom of religion, and I may have got my job back, but I walked around the corner of Izmit, Kocaeli (near Istanbul) and found a better language school that paid more and gave me more teaching hours.

I still did not have a good place to live.  Some female teachers from the first language school had offered me a bed, but I must have offended them, too, for I was told to leave.  I was sitting on the steps in front of their apartment building with my luggage stacked around me.  I looked and felt like a refugee.  Indeed, I did not have much to return to in America:  no home, no job, no husband.  My young adult children had their own lives, and I was not important in them.

Davut and his friends found me there, and he immediately offered me a place to stay in the spare room of his apartment.  I stayed there for months.  He did not even ask me to pay him, but I paid a little that I could afford.  He knew I was lonely, and he invited me to hang out with him and his friends.  We walked through the cobbled streets of old Izmit, stepped into ancient stone churches and tiled mosques hung with tiny lights, drank tea and played backgammon in cafes by the Marmara Sea, strolled through parks lined with multi-colored tulips (“lale” is the Turkish name of the tulip flower which the Dutch imported from Turkey).

Then I married the wrong Turkish man.  Davut and his friends came to the wedding.  I lost contact with him after that.  I got involved in the Turkish freedom protests.  I escaped to China for 2 years and then returned to California where I felt very much like a refugee, sleeping in my car, doing odd jobs, no home, very little family, unfamiliar with the America I had left 5 years before.

I have been in California now for almost 3 and a half years, and those years were so much harder than the five I spent in Russia, Turkey, and China.  They have also been hard years for Davut.  On the day of his wedding, before the ceremony could start (with all the preparations made and the bride and guests waiting), the Turkish police arrested Davut. Under Dictator Erdogan’s command, Davut’s human rights were violated.  Davut had been a faithful Army Officer.  His only crime was wanting Ataturk’s secular democracy back and the Turkish Constitution upheld.  It guarantees the human rights of freedom of religion, freedom of the press, freedom of speech, and freedom of peaceful assembly–just like those given in the U.S. Constitution.  Davut was imprisoned for 16 months and psychologically tortured.

His friends abandoned him.  Even his fiancé thought he was a criminal.  His family was poor.  His sister wrote to me, and I asked her to tell Davut that I was praying for him. 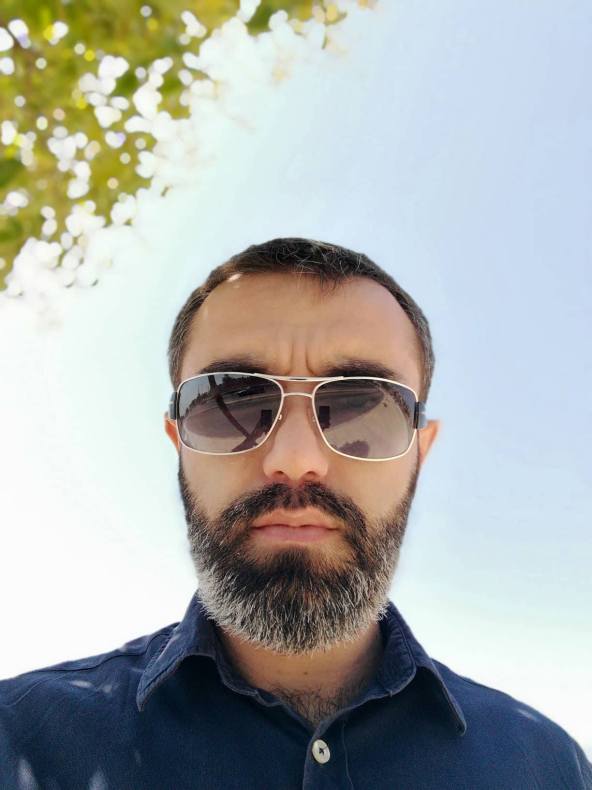 Davut looks older and sadder after 16 months in prison

I wished I could do more!

Then he was released.  His job and passport were taken from him.  In December, in the freezing cold winter, Davut swam from a Turkish island in the Aegean Sea to a Greek Island.  He texted me in real time, telling me that it was dark, that he didn’t know exactly where he was, that he was very cold.  He told me that he had just called the Greek police and was turning himself in as a Refugee.

Since that time Davut has been trying to survive in Athens.  He cannot work.  He needs $3000 to go to Germany where he has friends and a relative.  I should have saved money from my job teaching in a prison–before I lost it and then had to move.  I can barely take care of myself, alone.

So I write Davut’s story.  He is one of millions.  He is Muslim.  He respects Jesus and Christianity.  He gave me my first Koran.  I gave him his first Bible, marking the place that tells the story of his namesake, King David.

He can’t just take a flight to join me in California freedom.  Why should his religion and country of birth hold him back?  He helped me when I was a kind of refugee in his country, my bags strewn around me, no home or job to return to in America, crying into my folded hands, scared, tired, cold.

Help me to help him now.  If you know of any organization that could step in, please tell me.  If you have any money you could lend, please do.  Davut wants to get a job, and he will repay you.  You can leave a message here on my Blog or email me at selahtrilogy@yahoo.com.  If I could sell more of my books, I would help him.

California is a Sanctuary State.  Surely someone here can help Davut and others like him.  In many ways I am grateful to President Trump for strengthening the American economy so that I could find the jobs I could not find under Obama’s reign.  I left America in 2010 and found adventure and support in foreign countries.  Now that I’m back, I wonder why so many people want to build a Wall.  Unless we are one of the American Indian tribes, all of us are immigrants to America.  Some came willingly, some were kidnapped and sold as slaves.  Now that we have become a world of refugees, we can see that many are still enslaved.  Couldn’t we bring one or two to freedom with us?

How would you feel if you were on the wrong side of that Wall?